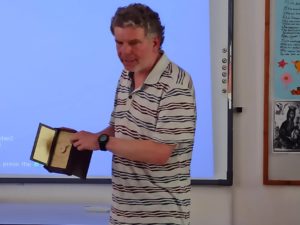 This project has been supported by the Royal Astronomical Society Education & Outreach Small Grants Scheme.
​You can see the winners' list here!
All materials are licensed under a Creative Commons Attribution 4.0

In the summer of 1901, Greek sponge divers who had accidentally discovered an ancient shipwreck (dated to around 60 BCE) just off the Greek island of Antikythera, helped to retrieve from the sea an object that has fascinated scientists ever since. It is now known as the Antikythera Mechanism and for over a hundred years researchers have tried to uncover its secrets. Due to the ingenuity of modern scientists and also to the capabilities of modern technology, many of its amazing functions are now understood. Constructed sometime between the 2nd and 1st century BCE, it could be used to predict the position of the Sun and Moon (and most probably the visible to the naked eye planets), follow ancient calendars, predict the possibility of eclipses and to determine the occurrence of the ancient games such as the Olympics.

The Antikythera Mechanism was a product of the Hellenistic period (starting just after the conquests of Alexander the Great who reached from modern day Greece up to northern India), during which the ancient Greek civilisation came into direct contact with some of the great civilisations of the East. It encompasses much of the astronomical knowledge acquired over many centuries, not only from the ancient Greeks but also from civilisations such as the Babylonians and ancient Egyptians. The complexity of its design using dozens of gears was not seen again until the construction of clocks in the middle ages.

For this project a novel combination of the Google Earth and the freeware planetarium software Stellarium is used to reveal the history and the amazing capabilities of this wonderful device. Users are taken on a journey around the ancient world to those places and civilisations that influenced the design of the mechanism. By completing simple tasks in Stellarium, they gain a greater understanding of the astronomical concepts involved.

So if you want to embark on this journey, just click on the link below. Once Google Earth starts, hit the 'Present' tab and you are off!
Click below to start the journey:
ANTIKYTHERA MECHANISM: LEARNING ABOUT ASTRONOMY FROM AN ANCIENT COMPUTER
Για την έκδοση στα ελληνικά, κάντε κλικ εδώ:
ΜΗΧΑΝΙΣΜΟΣ ΤΩΝ ΑΝΤΙΚΥΘΗΡΩΝ: ΜΑΘΑΙΝΟΝΤΑΣ ΓΙΑ ΤΗΝ ΑΣΤΡΟΝΟΜΙΑ ΑΠΟ ΕΝΑΝ ΑΡΧΑΙΟ ΥΠΟΛΟΓΙΣΤΗ 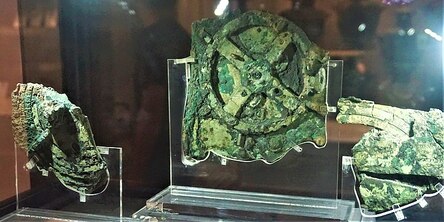