Estimating the size of the Moon (Aristarchus)

Aristarchus also used his geometrical and astronomical knowledge to estimate the relative size of the Moon compared to that of the Earth. To do this he observed a lunar eclipse.

The geometry of a lunar eclipse is shown in the following figure. When the Sun - Earth - Moon are aligned, the Moon will move through the dark shadow of the Earth. If the alignment is such that the Moon becomes totally submerged in the dark shadow (known as umbra) then we witness a total lunar eclipse. 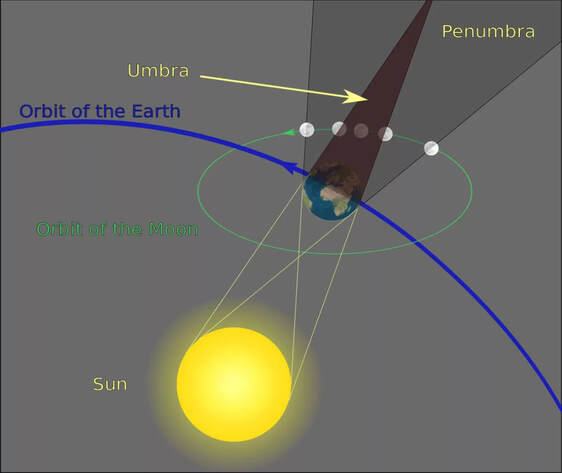 ​Aristarchus realised that by investigating the motion of the Moon in the Earth’s shadow he could estimate its relative size. We do not know for certain how exactly he did this but one method, and quite possibly the one he used, would be to measure the various timings of the eclipse.

To better understand the meanings of t1 and t2, have a look at the diagram below. Please note that the images of the Moon and the Earth’s shadow (umbra) are not portrayed exactly to scale, so you should not take into account the relative sizes shown in this diagram when taking your own measurements. 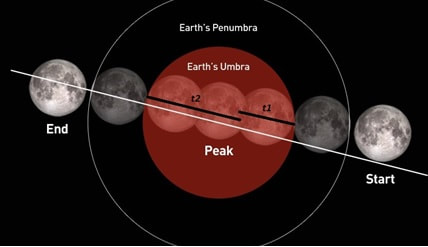 Simple logic can be used to deduce the formula:

Now an important point to make is that in this example, is that this corresponds to the Earth’s radius being double the radius of the Moon only if the shadow has a constant width. As we can see in the eclipse geometry figure this is not the case; in fact the shadow tapers (narrows) as we move away from the Earth. So for a better approximation we must multiply our result by a certain factor. Using geometrical calculations, this factor turns out to be roughly 1.35. So in this case, the radius of the Earth would have actually been estimated to be 1.35 x 2 = 2.7 times the radius of the Moon.

Start Stellarium and in the Time/Date Window, set the date to:

Next, set the location in the Location Window to Athens in Greece. Set the local time to around 11:10 pm.

You must now look closely at the Moon, to do this you should click on it and then press the Page Up key to zoom in. Progress the time until you observe the beginning of the lunar eclipse. During a total lunar eclipse, the Moon does not vanish (like the Sun does in a total solar eclipse) but noticeably changes colour, becoming red. For a nice animation of this, click here!

Measure the times t1 and t2. Use the expression: