The star Polaris located in the Little Bear constellation, is approximately aligned to the axis of rotation of the Earth and is placed very close to the north pole of the celestial sphere. It can therefore be used for celestial navigation in the northern hemisphere, as navigating towards it will result in a motion due north. Also, by some simple geometry it can be shown that the altitude of the polar star as measured from a particular location, is equal to the latitude of that location.

The alignment with the axis of rotation of the Earth means that every other visible star is seen to rotate about the polar star in a direction from east to west. Polaris therefore has a pivotal position in the sky. What may come as a surprise, however, is that the star Polaris has not always been the pole star and that in the future other stars will take its place. The reason for this is a type of motion known as precession, discovered by the ancient Greek astronomer Hipparchus. 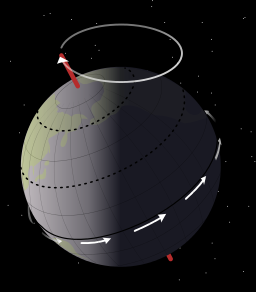 Precession of the Earth: Taken from https://commons.wikimedia.org/wiki/File:Earth_precession.svg

In order to get an idea of what precession is, think of the motion of a top. As it spins round its axis, the axis itself also wobbles following a circular path, albeit at a much slower rate. Due to the attraction of the Earth from the Moon and Sun, its axis also slowly follows a circular path with respect to the fixed stars. The period of this motion is approximately 25,800 years

This motion of the Earth’s axis means that the position in the sky of the celestial poles (north and south) will constantly be changing. The top of the axis points to different stars as it slowly rotates. At our age, it points towards Ursa Minor (the Little Bear) and the star Polaris. The star gamma Cephei will rule after 3000 CE, as it will be closer to the north celestial pole (where the arrow will point to), than Polaris. At the time of the pyramids the pole star was Thuban in the constellation of Draco. The brightest pole star ever is Vega in the constellation of Lyra. It reigned as pole star at about 12000 BCE and will regain the throne around 14000 CE.

The polar region of the sky was particularly important for the ancient and medieval Chinese as it mirrored the authority of the emperor. The pole star for the Chinese at this time was known as Tianshu, the Celestial Pivot, or Niuxing, Pivot Star, and although not particularly bright (certainly not as bright as Polaris), was highly regarded due to its prime position.

But what exactly was its position relative to the celestial north pole? At about 500 CE, Zu Geng (480 – 525 CE), a Chinese mathematician, politician, and writer used an astronomical instrument to measure the angular distance between Tianshu and the celestial north pole and found it to be just over one degree. We will use Stellarium to investigate this measurement.

Next, set the location in the Location Window to Nanjing in China. Make a note of the latitude of this location. Using the Date/Time Window, set the local time to 8:00 pm.

Use the Sky and Viewing Options Window to set the Starlore to “Chinese Medieval” and see the names used by medieval Chinese astronomers. Note how several of the asterism names are relevant to the life and rule of the emperor. Locate the pole star that was used by the Chinese at the time, the star Tianshu.

Next click on the Equatorial Grid at the bottom left of the screen. This draws a grid on the celestial sphere. You do not need to know more about this grid other than that at the very top you can locate the north pole of the celestial sphere. It is the point where the lines of the grid meet.

Use the Angle Measure plugin to measure the angular distance between Tianshu and the celestial north pole. To use the Angle Measure plugin, you must first go to the Configuration Window and to Plugins and select Load at Startup. If you have not done this already you will need to restart Stellarium to have access to it. To measure the angular distance accurately you will have to zoom in to Tianshu.

Is the distance comparable to that measured by Zu Geng?

Now progress the time and view the motion of the stars. Why do all the stars revolve around the celestial north pole?

Finally, click on Tianshu and read off the altitude of the star. Is it equal to the latitude of the Nanjing? Can you think of the reasons for any difference?

Next set the date to the current date.

Repeat the same procedure as above.

Is Tianshu in the same position relative to the celestial north pole or has it shifted? What is the reason for this?