Estimating the circumference of the Earth (Eratosthenes)

Eratosthenes (276 - 194 BCE) was a Greek polymath born in Cyrene (now Libya). He served as the librarian at the famous library of Alexandria in Egypt. As an astronomer he is said to have calculated the distances to the Sun and Moon, although it is not clear what method he used. As a geographer he described for the first time the geography of the entire inhabited world as it was then known, and most famously, he provided an estimate for the size of the Earth. He is therefore often referred to as the “Father of Geography”. 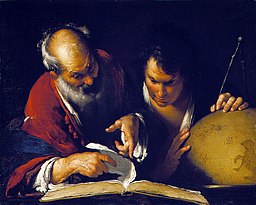 Eratosthenes used the following method to calculate the circumference of the Earth. At noon at the summer solstice (the day in June when at the Northern hemisphere the Sun is highest in the sky and daylight is longest), he measured the length of the shadow cast by a column of known height at Alexandria.  He then used his measurements to estimate the angle between the rays of the Sun and the vertical. 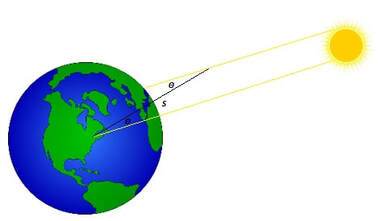 Method of Eratosthenes for estimation of the circumference of the Earth

​Eratosthenes also knew that on the same date and time, at Syene (modern day Aswan, in Egypt) located (approximately) on the same meridian line as Alexandria and at a distance of S = 5,000 stadia (a unit used for measuring distance at his time), the rays of the Sun fell directly vertically on to a well. By using the simple proportion that:
L/S = 360/θ

where, S is the distance between Alexandria and Syene and L is the circumference of the Earth, he was able to provide an estimate for the size of our planet, more than 2,200 years ago.

Eratosthenes reportedly performed his experiment at the summer solstice of 240 BCE.
Start Stellarium and in the Date/Time Window, set the date to: -239 / 6 / 26.

This was the date of the summer solstice at that year.
Next, set the location in the Location Window to Alexandria in Egypt.

To perform the experiment correctly we must find the Local Noon time in Alexandria, i.e. the exact time when the Sun’s altitude is at its greatest, which in our case is when it is located exactly South, i.e. when it crosses the local meridian. This is when the Sun’s azimuth is 180 degrees. The azimuth and the altitude are both provided as part of the information displayed if you find (through the Search Window) and click on the Sun (they are displayed as Az./Alt.). Note that for a variety of reasons, the Local Noon time is not exactly at midday as you may have expected.

Vary the time (round about midday) to find the Local Noon time at Alexandria at the summer solstice of 240 BCE. Record the altitude of the Sun at this point. By inspecting the image above and the definition of altitude provided in the introduction, it is possible to deduce that the angle θ measured by Eratosthenes is related to the Sun’s Altitude by:

θ =  90 – Altitude degrees (this is actually called the zenith distance).

Estimate the angle θ using the results given by Stellarium. Use the simple formula employed by Eratosthenes to calculate the circumference of the Earth in stadia. To obtain the results in kilometers rather than stadia, you must multiply by 0.184 (although the exact conversion factor is still disputed by scholars). Obtain the circumference of the Earth in kilometers and compare it to the accepted value in modern times.

Change the location to Aswan (called Syene in Eratosthenes’s time) and repeat the above procedure.

What would expect the altitude of the Sun to be at local noon? Comment on the result. State reasons why Eratosthenes’s result for the size of the Earth differs from the modern value.