Medieval Islamic astronomers were constantly trying to check and improve their predictions for the motion of the planets. Like the ancient Greeks, they used a model of the solar system, which is known as geocentric, i.e. with the Earth at its center. Their theories were based on those of Ptolemy, formulated about 1,000 before them. Nevertheless, their refinements and overall contribution were very important as they led to the development of the revolutionary models developed in Europe in the later centuries.

Ibn al-Fahhad, was a prolific Persian astronomer of the 12th century CE, who like many of the medieval Islamic astronomers, produced a series of astronomical tables. His work was highly influential and in the 1290s was translated into Greek and was thus transmitted to Europe. This is another example of how scientific knowledge from the Islamic civilisation was used to fuel the scientific revolution which occurred in Europe after the middle ages.

Astronomical tables like the ones produced by Ibn al-Fahhad were used to predict the position of celestial objects, including those of the planets. It was very common at the time for an astronomer to compare the predictions of his tables to those of earlier astronomers in order to try and prove their superiority.

In a famous example, Ibn al-Fahhad, used a spectacular celestial event, a conjunction between the planets Jupiter and Saturn, in order to show that his predictions improved those of previous astronomers. A conjunction of two celestial bodies occurs when they appear very close to each other in the sky. A conjunction of Jupiter and Saturn was considered a particularly important event in medieval times, so it was known as the Great Conjunction. Ibn al-Fahhad compared his predictions to those of his predecessors, those of the famous Arab astronomer, al-Battani (858 – 929 CE), and the Persian astronomer al-Khazini who flourished shortly before Ibn al-Fahhad did. 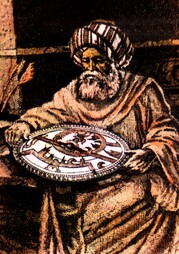 The predictions made by the astronomical tables of the three astronomers for the Great Conjunction date were the following:

We can use Stellarium to see who got closest to the actual date.

Use the Angle Measure plugin to measure the angular distance between Jupiter and Saturn. To use the Angle Measure plugin, you must first go to the Configuration Window and to Plugins and select Load at Startup. If you have not done this already you will need to restart Stellarium to have access to it. To measure the angular distance accurately you will have to zoom in to the two planets.

Next set the date to:

Repeat the same procedure as above.

Which of the three astronomers got closer?

It turns out that none of the astronomers got it exactly right. Can you pinpoint the exact date when Jupiter and Saturn were closest to each other?

In theory the human eye can separate objects which are at a minimum distance of 1 arcminute. Would a viewer from Shirvan manage to separate the two planets according to this theoretical value? Can you think of any practical reasons why for two bright planets this minimum distance may in fact be larger?