A supernova is a spectacular explosion of a massive star occurring at the end of the star’s life cycle. 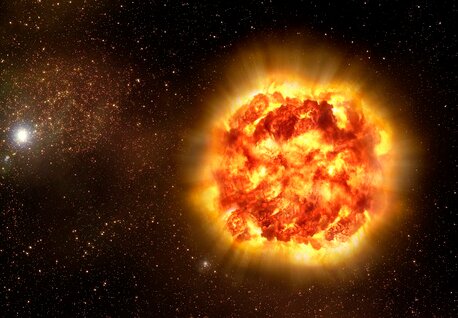 Artist’s impression of a supernova: Taken from ESO: https://www.eso.org/public/images/eso0644a/

For a dying star to explode like this it must have several times the mass of our Sun. One of the ways supernovas can occur is the following. Massive stars burn large amounts of nuclear fuel making their cores extremely hot. This heat creates an outward pressure which counters the inward force of gravity keeping the star from collapsing. For a star to be held together there must be a balance between the two opposing forces. Eventually however, the star runs out of fuel cooling off and gravity prevails. The collapse of the star happens very quickly and creates shock waves that cause its outer part to explode.

When a supernova occurs, the result is spectacular. The event is so bright that when viewed from the Earth they can outshine even the brightest of stars. Unfortunately, supernovas that can be seen by naked eye from our planet are not that frequent, the last one occurred a few hundred years ago. Modern day astronomers, however, can see them happening through their powerful telescopes. Not only this, but leftovers or remnants of supernovas that occurred in the past can also be discovered. The Crab Nebula seen in the picture below, is the remnant of a massive star in our Milky Way that exploded as a supernova. 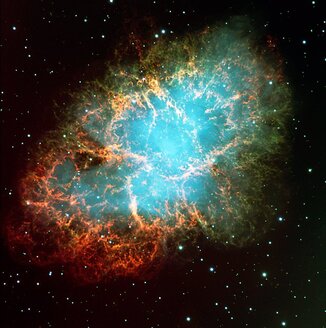 Modern day astronomers rely on observations made by their medieval counterparts to pinpoint the position of supernova remnants. Both Islamic and Chinese astronomers made detailed observations of night sky. It is not surprising, therefore, that observers from those civilisations were amongst those to note the appearance of a new and spectacular celestial object. Two of the most impressive supernovas that were seen in the middle ages, was the one that appeared in 1006 (known as SN1006) and the one that was viewed in 1054 (known as SN1054 and from which Crab Nebula originated from). When the medieval astronomers saw those “guest stars” (as they were called by the Chinese) suddenly appear, they were struck with awe.

Note: To complete this activity you must have the Angle Measure and Historical Supernovae plugins enabled. To enable the plugins, you must first go to the Configuration Window and to Plugins, locate the two plugins and select Load at Startup. You will need to restart Stellarium for the plugins to work.

The supernova SN1006 was seen by the Egyptian astronomer Ali ibn Ridwan (988 – 1061 CE). His precise words were the following:

“I will now describe a spectacle which I saw at the beginning of my education. This spectacle appeared in the zodiacal sign Scorpio, in opposition to the Sun. The sun on that day was 15 degrees in Taurus and the spectacle in the 15th degree of Scorpio. It was a large spectacle, round in shape, and its size 2 or 3 times the magnitude of Venus. Its light illuminated the horizon and it twinkled very much. The intensity of its light was a little more than a quarter of that of moonlight”.

Next, set the location in the Location Window to Cairo in Egypt. Using the Date/Time Window, set the time to 8:50 pm.

You can use the search tool to locate the supernova. It is given under the name SN1006A.

Check that the location of the supernova is roughly consistent with the description provided by Ali ibn Ridwan who states that it was close to the constellation of Scorpio.

Let us now see how bright the supernova is. The brightness of a celestial object is measured by its magnitude. Magnitude can acquire negative values and the lower it is brighter the object. For example, the Sun has a magnitude of about -26.74, the full Moon -12.74, bright planet Venus -4.25, the brightest star Sirius -1.46 and the faintest star observed by naked eye about +6.5.

Click on the SN1006 and note its magnitude. How does this compare to the full Moon? Is it brighter or dimmer?

Now start moving back in time, in steps of one day and observe the change in the magnitude (brightness) of the supernova. On what date does it reach its peak?

Use Stellarium to produce a plot of the magnitude versus time for SN1006. This kind of diagram is called a light curve. You can start from the peak date and then in increments of 1 week, go back two weeks and forward by 8 weeks thus recording a total of 11 measurements. You could of course continue for much longer if you want but this will take up more time.

Now let us move forward in time and view the famous SN1054 supernova. This was a particular bright one and was observed by many around the world. Amongst those were the astronomers of the Chinese court. It was a long tradition, that the Chinese emperors had to follow advice from the sky in order to rule the empire. This is a reason that astronomy flourished in China. The main responsibility of the emperor was to keep the Earth in total harmony with the sky, what was known as the “Mandate of Heaven”. The court astronomers interpreted the position and motion of celestial objects and their interpretation influenced daily life as well as major political decisions. The observation of a supernova, a “a guest star” as the Chinese called it, was a particular important event.

The guest star of 1054 occurred during the reign of the Emperor Renzong of the Song dynasty. This is recorded in Chinese documents as "the first year of the Zhihe era". Zhihe was an era name used during the reign of Emperor Renzong, and corresponds to the years 1054 –1056 CE, so the first year of the Zhihe era corresponds to the year 1054 CE. Here is how one of those documents reports it:

“the director of the Office of Astronomy reported that during the fifth lunar month of the first year of the Zhihe era, a guest star had appeared at dawn, in the direction of the east, under the watch of Tianguan”.

In the Date/Time Window, set the date to:

Next, set the location in the Location Window to Kaifeng in China. This is where the capital of the Song Empire was located at the time. Using the Date/Time Window, set the time to 3:30 am.

Now start moving back in time, in steps of one day and observe the change in the magnitude (brightness) of the supernova. On what date does it reach its peak and what is its peak magnitude? How does it compare to SN1006?

Use Stellarium to produce the light curve for SN1054 in the same way as you did for SN1006. You can start from the peak date and then in increments of 1 week, go back two weeks and forward by 8 weeks thus recording a total of 11 measurements. You could of course continue for much longer if you want but this will take up more time.