Indian astronomy has a history that spans several thousand years but it is the period around the 5th – 6th century CE where it is said to have reached its greatest heights. This is when the most famous Indian astronomer, Aryabhata (476–550 CE), flourished. His greatest mathematical and astronomical work, the Aryabhatiya, represented the pinnacle of astronomical knowledge at the time. 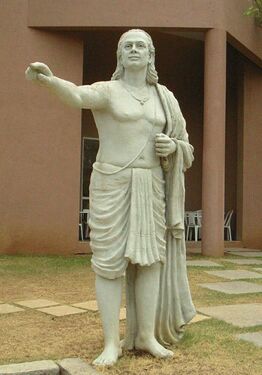 A sidereal day is the time it takes for the Earth to completed one revolution about is axis with respect to the fixed stars. A solar day on the other hand, is the time it takes for the Sun to return to our local meridian (due South for the Northern hemisphere and due North for the southern hemisphere). The solar day is what we are more used to (more precisely the mean solar day), and it lasts 24 hours. The sidereal day is a little shorter and the following figure illustrates why. 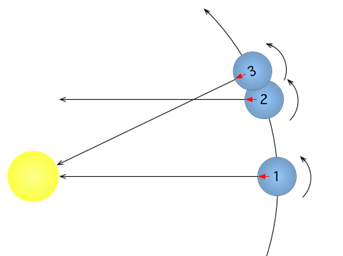 At point 1, the sun lies at our local meridian. At point 2, the Earth has completed one revolution with respect to the fixed stars but because of its motion relative to the Sun, the Sun has still not reached our local meridian. In order to achieve this (at point 3), the Earth must spin for a little longer than 24 hours. So, the solar day is slightly longer than the sidereal day and this is due to our motion around the Sun.

Next, set the location in the Location Window to Patna in India. This is where Aryabhata lived for part of his life.

Set the local time to 10:30 pm and locate the star Canopus (you can obviously use any star to perform this). Determine the exact time when Canopus crosses the local meridian (i.e. when it is exactly South with an azimuth of 180 degrees).

Use the difference in the two times to estimate the duration of a sidereal day.

Aryabhata determined the sidereal day to be 23 hours, 56 minutes, and 4.1 seconds.

Compare the value you obtained to that of the great Indian astronomer.