Pytheas (350 - 285 BCE) was born in the ancient Greek colony of Massalia (now Marseille in southern France). We know very little about him other than that he made a truly amazing journey to the limits of the then known world. His journey was in fact so incredible, that some historians writing about it a few hundred year later, found it hard to believe it ever took place. It is now generally accepted, however, that the journey described in his work “On the Ocean” (which unfortunately does not survive), did happen. The fact that great scholars of antiquity such as Eratosthenes and Hipparchus treated his scientific observations as reliable, adds to the credibility of his story. Although we do not know the exact details, it is believed that Pytheas started from his hometown of Massalia, crossed over to Cornwall in England, reached the far north of Scotland and the Isles of Shetland, and possibly from there ended up in Norway or Iceland before making the return journey home. 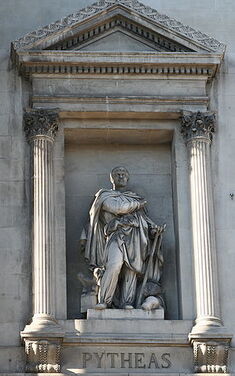 References to his work from scholars of antiquity, reveal to us that Pytheas was not only an extremely courageous traveler but also an accomplished astronomer. He used measurements of the shadow from the Sun to determine its altitude and from there a location’s latitude; he observed the way the sky changed as he moved North, and he speculated on the connection between the ocean tides and the Moon. 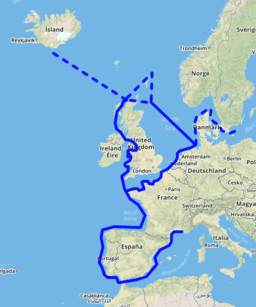 
It is the determination of location with the help of the Sun that we will concern ourselves with in this activity. Pytheas measured the maximum altitude of the Sun, i.e. its altitude at local noon, at the winter solstice (when night time has its greatest duration and the Sun rises the lowest). The further north he went the lower the Sun rose on this midwinter day. It is therefore possible to use his measurements (as historians have done) to obtain an idea of how far north he travelled to.

This was the date of the winter solstice at that year.
We will use three of the measurements made by Pytheas (which have survived through the works of the historian Strabo who lived about 300 years after him) to try and reconstruct part of his journey.

Strabo mentions that Pytheas observed the maximum altitude of the winter solstice Sun at three northerly locations as being 6, 4 and 3 cubits. A cubit is an ancient type of angular unit and is approximatelly equivalent to 2 degrees. Some researchers believe that the first and last of these measurements correspond to the Isle of Man and to the Isles of Shetland respectively. We will use Stellarium to check if this makes sense.

Set the location in the Location Window to Douglas on the Isle of Man.

To perform the measurement correctly we must find the Local Noon time at the Isle of Man, i.e. the exact time when the Sun’s altitude is at its greatest, which for our case is when it is located exactly South, i.e. when it crosses the local meridian. This is when the Sun’s azimuth is 180 degrees. Remember that the azimuth and the altitude are both provided as part of the information displayed if you find (through the Search Window) and click on the Sun (they are displayed as Az./Alt.). Note that for a variety of reasons, the Local Noon time is not exactly at midday as you may have expected.

Vary the time (round about midday) to find the local noon at Douglas at the winter solstice of 330 BCE. Record the altitude of the Sun at this point. Does it correspond to the 6 cubits measured by Pytheas?

Now change the location to the Isles of Shetland and repeat the above procedure.

Record the maximum altitude of the Sun at the winter solstice. Does it correspond to the 3 cubits measured by Pytheas?

Finally, use Stellarium and a map to try and determine a possible location for the 4-cubit measurement made by the great voyager.