The Babylonian civilisation was one of the most ancient and important civilisations of antiquity. The capital of the empire, Babylon, which was located about 85 kilometers south of Baghdad in modern day Iraq was one of the great cities, founded more than 4,000 years ago. To the Babylonians we owe amongst other things, the use of the hexadecimal measuring system (a system of base 60 which means that there are 60 seconds in a minute, 60 minutes in an hour, and 360 degrees in a full circle) and the concept of zodiac signs. Although it was the ancient Greeks that advanced astronomy more than anyone else in antiquity, much of their initial knowledge was based on the measurements and methods of the Babylonian astronomers. 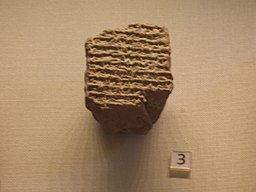 The Babylonians were also the first known people able to predict the occurrence of eclipses. Eclipses were considered bad omens so it was important that the astronomers could warn their rulers in advance of such events. Years of observations had revealed to them that certain cycles existed over which both solar and lunar eclipses occurred (although the Babylonians were more interested in the latter type). One such cycle is the so-called Saros cycle. It has a duration of 223 lunar months, i.e. 18 years and 11 and 1/3 days or 6,585.3 days. A lunar month is the time it takes for the Moon to return to its current phase. So, for example if a lunar eclipse is observed at a certain time with the Moon obviously at its full Moon phase, then 223 full Moons later another eclipse will occur. In other words, after a complete Saros cycle, the Earth, Moon and Sun return to almost the same configuration. It is therefore a powerful tool for predicting the future.

The Babylonians also used another type of cycle of the heavens to regulate their calendar. This cycle has come to be known as the Metonic Cycle. It gets its name from the ancient Greek astronomer Meton (who lived in the 5th century BCE) although it was almost certainly known to the Babylonians before him. It is possibly another example of the ancient Greeks building on ancient Babylonian knowledge to advance their own science. The Metonic Cycle (approximately 6,939.688 days), utilises the fact that 235 lunar months are almost equal to 19 years. Considering that 235 is equal to 19 multiplied by 12, plus another 7 months, then by adding 1 lunar month seven times in a 19 - year cycle, a calendar can be devised that will very nearly follow both the lunar phases and the seasons.

By a coincidence the cycle also contains 254 sidereal months. A sidereal month is slightly shorter than a lunar month and it is the time it takes for the Moon to complete a full orbit around the Earth and thus appear at the same position relative to the background stars. So, after one Metonic Cycle, the Moon also returns to almost the same position relative to the stars. Finally, the Metonic Cycle can be used to predict eclipses. If an eclipse is viewed then one Metonic Cycle and about half a day later, another eclipse will usually occur. The Metonic Cycle formed the basis of the ancient Babylonian calendar and is still used to regulate the Hebrew calendar and to calculate the date of Easter in the Christian world.

We can use Stellarium to test the predictive abilities of the Babylonians regarding eclipses.

Verify that a lunar eclipse is occurring at this time.

A Saros cycle has a length of 6,585.3 days. We must add this exact number of days to the current date. Fortunately, there is a quick way of doing this.

Using the Date/Time Window click on the Julian Day Tab. On the left-hand side, you will see the number of days elapsed since January 1st, 4713 BCE. This is a convenient time calendar system used by astronomers. It helps them specify the time difference in days between two astronomical events.

Now input this number to the Julian Day Tab to move forward in time by one Saros cycle.

Can you see a lunar eclipse occurring as predicted by the Babylonians? Using the Date/Time Tab make a note of the date.

Next let us investigate the properties of the Metonic Cycle.

​Make a note of which constellation the Moon is close to, i.e. where it lies in relation to the background stars. You can also use any prominent nearby stars to mark the position of the Moon.

Using the Date/Time Window click on the Julian Day Tab.

Using a calculator, add the 6,939.688 days to the Julian Day to move forward in time by one Metonic cycle.

Is the Moon approximately (not exactly) at the same position in sky with respect to the stars?

Finally, a Metonic Cycle could be used to predict eclipses. If an eclipse is observed at any time, then approximately half a day after the completion of a Metonic Cycle, another eclipse should normally occur.

Progress the time by a few hours and check that this is actually the case.
​